Praying for a Parking Space 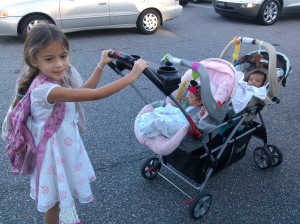 One of the mommies from my church group gave an example of how her mother used to teach her about God when she was little. She said her mother would pray out loud for everything, even simple things like a parking space. This comment made me smile. Here is the story behind that smile:

The twins were born in the summer. My six year old daughter, Mica, had about 7 weeks to enjoy them during her break. I really enjoyed having her around and did not look forward to her going back to school, so as the inevitable season approached, I was sooo not ready.

About Two weeks before school started, I got a generic “Items you will need for this grade” kind of list in the mail. I decided not to go back-to-school shopping just yet, as I had learned the previous year, that each teacher would want something different for her classroom. At the open house I was proven correct so I was glad that I hadn’t gone already because I would have had to go again, however, the open house was held on the Thursday before school started, making me one of those last minute shoppers. I knew the stores would be crazy (being that the back-to-school season is one of the biggest retail opportunities, second only to Christmas).

I was not back in shape at all physically and therefore didn’t feel like I had the energy to go. I was nursing two babies and that kept me pretty busy. I did not have much time to go anywhere before one of them was hungry again. Money was also extremely tight. The teacher had told me that they had plenty of some specific items so I didn’t need to worry about a few things, such as sanitizing wipes and paper reams (I promised to fix her up with a gift card later in the year that she could use for whatever she needed at that time). I also had a friend with a daughter about the same age who had extra of some of the things that I needed, which she kindly shared. So my list was not quite as long, which would save me time and money, so I was extremely grateful.

But, I still had to go to the dreaded store.

We had an appointment of Friday, so I didn’t get a chance to go until Saturday. I braced myself. My plan was to go by myself and get in and out as quickly as possible.

As I approached the store, I thought about praying, “God, please give me a good parking space.” This is something I normally wouldn’t have a reason to do. I usually purposefully park in the back of the lot in order to incorporate exercise into my daily routine. I do try to park close to the cart return, however. I got into the habit of doing that when Mica was small. But this was an extenuating circumstance. I was low on time and energy. I said the prayer but felt slightly ashamed for praying for something so seemingly trivial.

Low and behold, I got a good spot. It was a good thing too because the place was a madhouse and it did take a toll on me to find everything from the list. I even had to ask an employee for a specific kind of yellow folder. There were only two left. There was another mom there looking for the exact same thing so it worked out perfectly. They had plenty of the one very specific kind of composition notebook Mica’s teacher had asked for, and it hadn’t been listed on that first generic list, so I knew that her class would probably be short, so I bought a few extra of those. There was an overwhelmed father there and it was clearly his first experience with back-to-school shopping. “I just need dry erase makers, that’s it, I just need dry erase markers” I heard him say in an exasperated moment of frustration from not being able to find what he needed. I knew where they were so I was able to help him. I ended up walking out with everything I needed and although I was exhausted, I felt accomplished. As I left and another mom in another car waited for me to pull out, I wondered if she had prayed for a good parking space (and hoped she didn’t need a yellow folder).

Only a few weeks later, I found myself in a similar situation. I had a long grocery list and a short time to shop. It was the weekend and the store was crowded. As I approached the lot, I debated about whether I should “bother God” with another prayer. I didn’t feel I had as much justification to need a closer spot this time. So I prayed, “God, If you don’t mind, may I please have a good parking space?” Then I quickly added, “but not my will but Yours be done.”

I ended up in the very last spot furthest away from the store. It was no where near a cart return. “Oh well, I guess God wants me to exercise today,” I thought to myself.

I did my shopping, got the “Are you about done?” phone call from Amor while at the check out and made it back to the car, again exhausted. As I was packing the groceries into the car, I kind of grumbled in my mind about having to take the cart all the way back to the store. I was tempted to leave it there, but thought, “No, that wouldn’t be doing the right thing. Live a life of integrity and all that…” Just as I was wrapping it up, I saw an elderly lady approaching. She seemed to be struggling to push her own cart. She put her few little groceries in the back of her car which was parked directly beside mine. Out of breath, she turned to take her cart back to the store. “I can take that for you.” I said.

God’s will had been done. He put me there to help that lady.

So that’s why I smiled at that comment. God knows what He’s doing, even in the simple things, like guiding me to the right parking space.

Double Talk Quote: While watching PBS on Saturday morning, I said, “I don’t feel like watching how cheese is made.”  Mica says, “How Jesus made what?”

Verse: “…All things work together for good for those who are called according to His purpose.”  Romans 8:28

Word that has Lost its meaning: Lazy (replace with the word efficient)