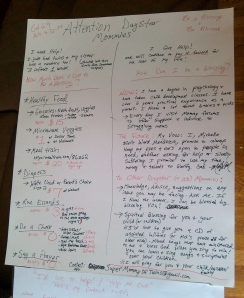 I have Bipolar Disorder.  And I am, by nature, a very introverted person.   Life has also thrown me a few curve balls that have, in a sense, caused me to build up certain emotional walls.  I keep people at a distance and have secrets that I will take to my grave.  I have very few close friends and I’ve always felt I didn’t really need many – I’m a very self-reliant person.  Don’t misunderstand; I am happy with not being super social.  I have a very tight-knit family and many people with whom I’m friendly.  Therefore, it is not in my nature to accept that I need help, much less accepting actual help.  I hate feeling dependent on anyone but myself.

When I started out with my second pregnancy, of course I compared it to my first.  I was very frustrated by how much more difficult it was.  I was sick all the time.  I was nauseated, shaky, faint, dizzy, seeing stars, had pain and palpitations in my heart, severe headaches and I was unable to regulate my sleeping patterns.  This made it very difficult to take care of my five year old kindergartener and aggravated Amor to the point where we had to see a counselor a few times.  At 18 weeks, when we found out we were having twins, it alleviated so much pressure, just knowing why my early pregnancy symptoms had been so exaggerated.  Of course, my later symptoms proved to be even more challenging, which gave me a new perspective into my own life.   For the first time ever, I had to start giving up control.  I’m very much a “if you want something done right, do it yourself” kind of person.  Letting go of my responsibilities, and letting someone else take over caused me so much dread and anxiety!  I realize now that God was working on me.

Since the babies have been born, I’ve come to realize that just because I can’t do it all on my own does not mean that I’m no supermom.  Nothing has made that more clear than our meal situation.  In order to make enough breast milk for the babies, I have to eat and drink healthy foods constantly.  But I certainly don’t have time to cook and clean.  My original solution for this was to buy ready-made frozen dinners, such as microwaveable veggies and lasagna. But with Bella’s sensitive tummy, I have had to cut out dairy which makes it difficult to find healthy, hearty, easy-to-prepare meals.  Not to mention I am eating myself out of house and home, so to speak.  Our financial situation was not great while I was pregnant and certainly has not improved since Amor hasn’t been working at a paying job.  Add the expense of out-of-pocket doctor visits, weekly ultrasounds before, and now hundreds of dollars worth of diapers and other baby supplies each month, and it becomes clear that basic survival comes with a hefty price tag.

One morning, while I was alone, the babies tag teamed me.  I was trying to nurse both of them, but they kept coming unlatched, looking up at me and crying.  I couldn’t understand the problem.  After trying everything I could think of, I set them down and tried hand expressing and realized I was all dried up!  Despite the 32 oz of water I had drunk upon waking up, I was dehydrated and depleted of nutrients.  With babies screaming in the background, I went and filled up my water pitcher and looked around:  what could I eat?  There was one banana.  I gobbled it down and chugged the water faster than a freshman downing beer the first night at the dorm.  I remembered I had a nutty granola bar left over in my purse from when I was still pregnant so I ate that too.  Only a few minutes had passed from the time I ate to the time I got the babies back on my breasts.  They hushed up immediately.

I texted my sister with the few free fingers I had with this plea:  Can you bring me breakfast?  I started crying.  After I finally got the babies settled, I took to Facebook with my pleas.  Starla set up a “meal train” system for anyone who wanted to sign up.  I also hit up all of Mica’s friends’ moms for play dates.  I contacted church members and friends of friends, begging, pleading… this is my moment, my time of need.  The initial response was one of support.  We’ve had four good meals and three more people have signed up for next week.  Mica has gotten out of the house a few times.  Over the past few days, I’ve spent every spare moment writing thank you messages and “liking” my own Facebook pleas to keep it up.  The lesson I have learned is this: no mom is an island.

Double Talk Quote: – Starla – “Joe just went to the bathroom. (Looks down at baby Brooks) I wonder if he’s making a poopie.”

Relatable Lyrics: “Lean on Me” by Bill Withers – https://www.youtube.com/watch?v=N5jlPL1tNDY

Verse:  Acts 4: 34-35 There were no needy people among them, because those who owned land or houses would sell them and bring the money to the apostles to give to those in need.

Term that has Lost its meaning:  a hot meal