6. What a Week! The Last of Monday and Tuesday 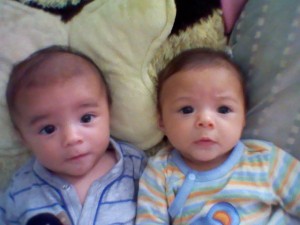 I had to pick up Mica from school early because they found nits still in her hair. Apparently Grandma didn’t get every single one out this weekend. But Amor was still in the shower and there was no one to watch the babies. I considered taking the babies with me, but just as I was putting Brooks in the car seat, Amor came out. I got Mica and went straight to the pharmacy where we ran into a classmate there for the same reason. “I don’t understand how he could have gotten them” exclaimed his mom. Um, me neither?

Back in the van ready to go home – it won’t crank. I saw a female security guard pass and flagged her down, asking for a jump. She called in for help, even though I had jumper cables, apparently, it’s their policy to use the battery box. I waited for what seemed like an eternity. I looked at Mica who kept scratching her head and I could feel my boobs swelling up. Now I actually wished I’d brought a baby or two, or at least a pump. I looked around and saw a guy just sitting in his car. Maybe he could help me. I asked him for a jump just as the second (elderly male) security officer arrived and told him not to worry about it. The man tried charging the van for about 30 minutes while I filled out liability paperwork. (Jeeze, who knew it was so complicated to jump a battery these days!) The van still wouldn’t start. I begged him to jump it from his car. No, no it’s against policy. The first security officer came back and I tried to explain my engorgement situation to her, in hopes that she’d jump it with her car. She was sympathetic and tried, but then she remembered there was a problem with the latch of her hood and she couldn’t get it up. Just then, Amor arrived. He had borrowed a truck, packed up the babies and come to pick us up. Yes…that’s my white (uh, Mexican) knight!
We got home pretty late. We called grandma in for support and they went to retrieve the van (and exchange one of the defective products they had sold me at the store!). Meanwhile, I tended to babies, tried to teach Mica how to essentially do algebra in Spanish (her homework gets pretty complicated sometimes), all while picking nits out of her hair with a flashlight in my mouth or tied to my head.

Really… Where are the reality show film crews? You can’t make this stuff up!

Tuesday Oct 21, 2014
So so very tired. There was some ambiguity about if Mica was going to school today. Her class was scheduled to go on a field trip. I pulled myself out of bed to see what the report would be. She didn’t want to get up, Amor was asleep, and Grandma didn’t feel like taking her (she felt a cold coming on). Ok, so I let her sleep in. It was kind of peaceful from 6:30am to 7. The babies breastfed back-to-back and I got to cuddle each on the bed. Tia showed up. Very unusual, since she’s a night owl and rarely up before 1pm. Bella was cuddle-able but Tia waited for me to finish nursing Brooks (yeah, she plays favorites). Before I got a chance to talk to her the phone rang. It was Mica’s teacher who noticed she wasn’t at school and encouraged me to bring her in just for the field trip. I was on the phone with her when Tia brought a now fussy Brooks back in just as Bella started stirring. I went and got Mica up and fixed Amor some coffee so he could take her to school.
When he returned he told me he had to leave to take the van to get inspected. Déjà vu. Didn’t he spend all day Thursday doing that. He gave me a long story about how it had to be running for a certain amount of time and he’d accidentally turned it off because he didn’t know that and the mechanic was the only one there and etc. It was getting late and I had an appointment later that day so I told him it would just have to wait. I needed his help. I showered!
After my appointment, I came straight home in vain hopes of getting a nap before Mica got home from school. Of course that didn’t happen. We had a church group coming and Grandma was very sick.

I could barely keep my eyes open. I had been feeling a strange sensation for a few weeks. In each moment, I was alert, but looking back, even on a few hours, everything was hazy. Amor would ask, “What have you been doing?” Ummm, I don’t know… surviving?

I came to the realization, that despite all this stress, and that I was handling it well for my condition, I just can’t continue to be this groggy. I feel like the Seroquel helps with my Bipolar disorder but I simply can’t deal with the loss of energy exchange.

Note: please forgive the “free” writing style I’ve been using throughout this series. Just trying to type down this experience and these feelings before they disappear into the past and dissolve into obscurity forever.

5. What a Week! More Monday

7. What a Week! Wednesday