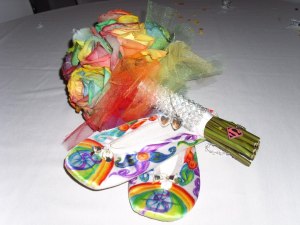 …Praise God, North Carolina issued us a marriage license. But that presented yet another problem:  We had to get married in North Carolina but we had already booked and put down a deposit on the SC venue and invitations had already been sent out.  We could go back to the Justice of the peace (again) and exchange vows at an NC court before the wedding, but that would give us yet a 3rd anniversary date!  We really wanted the wedding and corresponding legal document to be October 7, 2012, exactly 7 years since our 2nd vow exchange.

So we spoke to the pastor.  His church is actually located in North Carolina, right above the NC/SC boarder.  The beach resort where we were to have the wedding was only located about a half hour to 40 minutes away from the boarder.  The pastor agreed to officially marry us at his church in North Carolina, in the wee hours of the morning, before his church service that Sunday, and then meet us in South Carolina at 3pm for the wedding ceremony, where we would exchange vows, again, for the 4th time.  We needed two more (real life) witnesses, so this time, I enlisted the help of my other sister, Starla and her husband-to-be, Jeff.

So the day of the wedding, we got up early and headed north.  We said our quick and legal “I Do’s”, signed the paperwork.  Then,  we headed back down south to quickly get ready to renew the vows we’d just made. 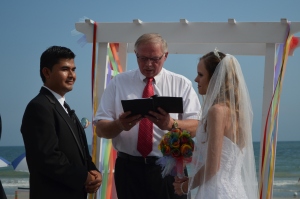 Because much of the wedding party and professionals were coming in from out of town, we were unable to have a rehearsal, so there were a few glitches but nothing that bothered me or Amor (but it may have irked Grandma, the perfectionistic organizer, just a little bit).  Mica, Hope and a dear friend, “Sharin’s” daughter were my flower girls.  I couldn’t pick a sister to be my Maid of Honor, so Mica played that role as well.  She even got to add to the ceremonial sand.  It was a precious and treasured family memory.  Our pastor’s wife, whom I’ve admired since I was five years old, read 1 Corinthians 13, which describes the attributes of love. 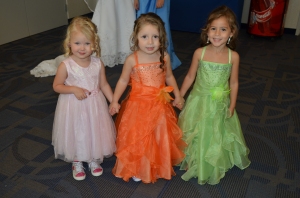 Having an actual wedding, with close friends and family in attendance was a fairy tale dream I never thought would occur.  The color scheme was rainbow, which is quite symbolic, in and of itself.  I had worked extensively with the DJ on the music.  The reception was a disco/karaoke type party which included music in both Spanish and English and a lot of colorful lights, glow sticks and bubbles.  (I’ve always preferred fun over elegance anyway.)

Since then, Amor has mentioned having yet another wedding in Mexico some day for the friends and family on his side that were unable to attend here.  I guess a 5th “I do” wouldn’t hurt.  It would give the twins the opportunity to add some ceremonial sand too!

Double Talk Quote:  “It went off with a ‘hitch’,”  instead of “without a hitch”- Me to Grandma when thanking her for making all this possible.

Term that has Lost its meaning: happily ever after