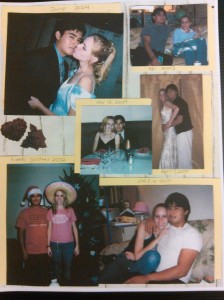 …So after having exchanged vows online, before God and Dick Wolf, we saw ourselves as married.  Amor bought me an inexpensive ruby heart shaped gold ring and we lived together for a hunky-dory few months.  But eventually, our families started asking questions.  Fed up with fielding them, I admitted, “We got married.”

My folks had an idea of how I felt about being an independent woman and were shocked to hear that we had “eloped” as they put it.  I offered few details and they asked surprisingly few questions.  Belle was now Mrs. Belle and that was that.

It was around this time that we moved four hours inland to be closer to my family.  I had finally gotten an official “Bipolar” diagnosis and I wanted to be near my sisters and parents who, I hoped, would be a source of support.   I knew that eventually, it would come out that Amor and I had no legal document stating that we were man and wife.  So we went to the courthouse to try to make it legal, only to learn we needed certain paperwork and witnesses (real ones, not TV characters).  So I explained to one of my sisters, Sarah, in as little detail as I could, that due to certain paperwork, we needed to restate our vows to make our marriage legal (all true).  She and Joe were happy to help.

So we gathered our documents and on October 7, 2005 (exactly 6 months later) we finally made it downtown with everything we needed.  I don’t even recall what I wore.  It felt like just another day to us.  We were pronounced “man and wife” by the magistrate and a few days later got our certificate in the mail.

The following year (2006), I was doing some different paperwork at a government office.  I had been on a litany of psychiatric drugs to try to find something to help manage my bipolar, and I was feeling “out of myself,” so Amor was with me.  They asked for my anniversary date and I said, “It’s April 7th or 8th”  “No, it’s sometime in October,” Amor reminded me.  “Oh yeah, I think it’s October 7th, 2005,”  I said.  The lady looked at me, like I was clearly mentally unstable (ok, I was).  “Um today is October 7th, 2006.  Are you telling me you are here on your first anniversary and you don’t even realize it?” Sigh, I guess so.  Whatever, we had celebrated back in April!

So finally, it was all settled, right?

One more detail that we, being young and impetuous and a bit screwed up in the head, neglected to take care of:  Amor never legally divorced his first wife who had left him for Russia after just two months of their legal marriage and never returned.

Spending time, money and effort to find and serve her papers was not high on our priority list.  As time marched on, we eventually bought a home and had a baby and put the whole mess in the back on our minds.

But those kinds of things have a way of sneaking back up to you..

Double Talk Quote: “Love you later” – Amor still says this (mix of “love you” and “see you later”)

Bible Verse:  “Houses and wealth are inherited from parents, but a prudent wife is from the LORD.” Proverbs 19:14

Word that has Lost its meaning: settled

***Update Note to clarify***  Amor’s 1st wife had moved to Russia 2 months after they got married.  He followed her and lived there for a few months in an attempt to save the marriage.  When it didn’t work out, he returned.